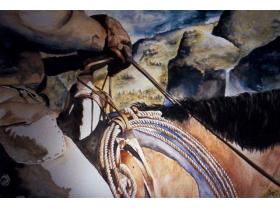 The Western part of our culture for one day, he was part of our childhood. The playgrounds still echo the cries of the battles between Indians and cowboys, but for some, born of the Western myth and a means of expression perpetuates the idea of a lost paradise where horses galloping of a desert to another. The action takes place in large areas of the West or in cities just named, but is't often the struggle between good and evil that dominates around eternal passions, that of gold, land or a woman.

The Western restores the splendor of an Eden far at a time when individuals, not from the mold of a hierarchical society, can live his destin.The man still has an intrinsic value based on those words that employs.
None of the works of IAC does each title, but might not be a "call up".

The inspiration for the film artist is often high because a bottle of American film, filled with images of contrasting colors, often that of a silhouette of a rider in the landscape, body erect and impassive eye, riding into the sunset.